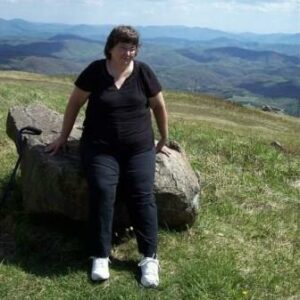 MS ALLIANCE:  Tell us about yourself, your MS diagnosis/journey and how long you have been living with MS.

REGINA:  I am Regina Dalton, the founder and co-leader of The Twin County MS Support Group in Hillsville, Virginia.  I’m mom to a 36-year-old son and a 31-year-old daughter.  They have each given me three grandchildren.  I have four grandsons ages 14, 10, and 7 (twins) and two granddaughters ages 12 and eight.  I am a Baptist Minister‘s daughter.  I am blessed to still have both of my parents.  Dad is 87 years young, and mom is 83 years young.

I was diagnosed with MS in June 2008.  I had experienced various symptoms for many years before, but no one had ever tested me for MS. I had my first major exacerbation while I was staying at the Brenner’s unit (Brenner Children’s Hospital in Winston Salem, NC) with my oldest grandson.  I just brushed it off as being worried and totally exhausted.  About a month later, I had another exacerbation while I was at work.  I went to the ER in Mount Airy NC and had a CT scan.  I was diagnosed as having experienced a brain stem stroke.  The doctor thought I was having another stroke and wanted to get me to a hospital with a neurological staff.  I was then medi – flighted to the hospital in Radford, Virginia (my first time flying).  I was examined in Radford, and they agreed that it was brain stem stroke and sent me home less than 24 hours later.

I had another exacerbation a month later.  I went to my primary physician and he sent me back to the ER with instructions not to fly me out again.  I had my first MRI. The ER doctor came in and told me I had numerous abnormalities in my brain, optic neuritis and a severe UTI.  I was admitted and started on Solumedrol.  I was tested for Lyme, STDs, and various other things that all came back negative.  I had a spinal tap and that was the conclusive evidence that I have multiple sclerosis.
The neurologist I saw at that time was not an MS specialist and he was not very knowledgeable about MS.  I saw him for several months but was not very happy with the care I was receiving.  The best decision I could have ever made was when I transferred to Dr. Cramer.  She reviewed my records and discussed my medical history with me.  Her conclusion is that I have most likely been living with MS since the late 80s – early 90s.

MS ALLIANCE:  Tell us about The Hillsville Twin County Support Group and how it came together with the MSAV.

REGINA:  Upon learning that I had MS, I started reaching out and searching for information and resources that were available to me.  I found the New River Valley Support Group and started attending the meetings.  They were about an hours drive away from me and after working all day and then trying to attend their meetings, it was just too much.  I contacted the National MS Society and asked what it would take to get a support group in Hillsville.  I was told that if I was willing to organize a group that we could have one.  I agreed and The Twin County MS Support Group was born.
I met Suzanne O’Connell at one of the MS Alliance Educational Dinner Programs.  We became friends and she started telling me about the MSAV.  I was very impressed.  Our support group had participated in several of the MS Walks over the years, but we were not really happy because we were not seeing our money at work.

I invited Suzanne to come to one of our meetings to present the MSAV to us.  She, Sharon Cross and Don Cross came, and we immediately agreed that we wanted to be a part of the MSAV.”

MS ALLIANCE:  Tell us about The Ramblin’ the Roadz for MS Awareness event happening this Father’s Day weekend.

REGINA:  I was driving home from work one Saturday afternoon and met a large group of motorcycles.  The wheels in my head started spinning and before I got home, I already had plans in mind for our first ‘Cruising for a Cure – Fight MS Bike Ride’.  It was for bikes, trikes, and classic automobiles.  We rode that year and for the next nine years.  Due to Covid, we were unable to ride in 2020 but we really wanted to get back on the roads, raising more funds.
Because we have a new partnership with the MSAV, we felt we needed a new name and so Ramblin’ the Roadz for MS Awareness was born.  We will be riding June 19th.  The route will cover 120 miles of open roads, lots of curves, secondary roads and more.  The riders never know what to expect from year to year.  I try to change the route every year to keep things interesting.  We are really excited about the ride this year –  renewing old acquaintances, making new friends, and raising much awareness about multiple sclerosis.

MS ALLIANCE:  Tell us some of the challenges you are proud of overcoming.

REGINA:  MS has presented a lot of challenges in my life.  It has taken things away that I cannot regain.  I worked for many years as an administrative assistant.  I had to give that up due to walking and cognitive issues.  I was our church pianist for almost 40 years.  I had to give that up due to numbness in my left fingers and hand.  I had to give up driving  due to the numbness in my right foot and leg.  But by losing all of those very important things in my life, I have learned to appreciate the small stuff, things that didn’t matter before.  I have screamed, cried, lost my temper, and begged of God “Why Me?”.  But at the end of the day, I stop and realize that I should be thankful for the things that I can still do.  I’ve lost friends due to complications from MS.  I have friends in nursing homes that can barely move their fingers.  I am blessed I can still live in my own home.  I can still take care of most of my basic needs.  I should be more grateful for what I have and not complain of the things I no longer have.

MS ALLIANCE:  What advice would you give to someone who is newly diagnosed with MS?

REGINA:  I have talked with several newly diagnosed people and the best advice I can give them is – Get mad if you need to.  Grieve because you’ve been given this diagnosis.  Let your emotions have their time, but then pull yourself up by your bootstraps, brush yourself off and face the world with the determination that even though you have MS, it doesn’t have you and you are going to fight this disease.  Find a local support group and let others help you along the way. We are in this fight together.

MS ALLIANCE:  What are some of the things you are looking forward to doing now that the world is getting back to ‘normal’?

REGINA:  As the world gets back to normal, I want to do more to raise MS Awareness.